Why Voting Matters
From the desk of Darin Compton

Periods of economic growth and expansion should be the best of times: periods in which living standards and wages improve; that’s still true for the top 10%.  Data gathered from the last ten economic expansions shows the bottom 90% (working families and the middle class) have continued to lose economically while the upper 10% has enjoyed startling economic gains. 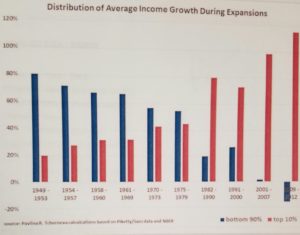 Today’s wealth inequality closely compares to the 1920’s when the economic divide was vast. The bottom 90% of all Americans earned 50.7% of all pre-tax income, while the top 1% earned 23.9% according to Berkley research analyst Emmanuel Saez. In 1936 during the economic crisis known as the Great Depression, Industrial Labor Unions worked to re-elect Franklin D. Roosevelt. The “New Deal” transformed both unions and Democrats and the Labor Relations Act enforced collective bargaining rights in the private sector in this time of economic crisis. Organized Labor and the Democratic Party have worked together ever since.

In the tradition of FDR, who put Americans to work after the 1929 crash building bridges, highways, dams; the Democrats are still fighting to devote more funds to high speed rail, modernizing airports, building roads, schools, and working to ensure these projects are built under project labor agreements with prevailing wages for skilled workers.

The 2016 United States elections will decide our next president, 100 senators, 435 representatives, 12 governors, and thousands of local and state officials, not to mention numerous bond measures which will fund Public Works Projects providing jobs for the building trades. It is important to research candidates and issues to know which will benefit working families. The Building Trades “Cope” Committee on Political Education meets every election cycle to interview candidates and discuss other issues on the ballot, and is a valuable source of information to voting union members. The COPE interview process focuses on issues of importance to working people. When the process is complete Cope participants vote whether or not to endorse a candidate based on interview answers and past voting records as it relates to labor issues. A similar evaluation process is conducted for ballot measures and other issues on the ballot. SCSBC building trades has a link on their website with county by county voting guides to labor friendly candidates and bond measures.

Today we find ourselves in another economic crisis; with the benefits of the current economic expansion increasingly going to the richest Americans. We as organized labor can fight this trend by getting involved, examining the issues supported by organized labor, and above all: voting.  Unions and Democrats continue to battle a rightward trending Republican Party, but “Unions don’t vote, members do. The Democratic party supports the middle class, of which most union members are a part of.”

You can register to vote at; vote2016.bacweb.org